On the 25th anniversary of the Beijing Declaration and Platform for Action, UN Women is bringing together change makers of all ages and genders to “tackle the unfinished business of achieving gender equality” and accelerate the implementation of commitments made in Beijing in 1995, by launching a groundbreaking, multigenerational campaign: “Generation Equality: Realizing women’s rights for an equal future.”For the next five years, the Generation Equality Forum, the Action Coalitions, and the Compact on Women, Peace and Security and Humanitarian Action prioritize urgent actions for implementation.

Recently Turkey pulled out of the Istanbul Convention, pledged to prevent, prosecute and eliminate domestic violence and promote equality. The Generation Equality Forum is a critical opportunity to build back greener, in a more equitable, gender-responsive and innovative mannerafter the COVID-19 pandemic. It represents a contribution to pushback against the pushbackon gender equalityby mobilizing broad support from various sectors.

UN Women’s Director of the Civil Society Division Lopa Banerjee is spearheading this effort as the Executive Coordinator of the Generation Equality Forum global public gathering for urgent action and accountability to expedite the implementation pace of gender equality. Co-hosted by France and Mexico, 92 leaders from 24 countries have made a five-year commitment to “catalytic action and implementation for gender equality” as part of the Forum’s Action Coalitions’ measurable and tangible targets and funding for gender equality through 2025. The Forum will kick off in Mexico City, March 29-31 and culminate in Paris this June.

In a virtual interview with Banerjee, we discussed her innate commitment to gender equality, which sprouted in childhood, living in her native Kolkata and Delhi, India and how her academic interest in literature and gender studies put her on the path in 2000 to realize her “childhood dream to work at the UN.”MORE FOR YOUMobilizing Zimbabwe’s Young Women’s Social Standing Beyond Patriarchal BoundariesThis App Is Empowering Relationships Just In Time For Valentine’s DayAmidst A Pandemic Genocidal Horrors Reawaken In Nagorno-Karabakh

Jackie Abramian: Would you say that the UNSC 1325 and the Beijing Platform have been a success or a failure in meeting the goals they set? And why hasn’t any country fully embraced women’s rights?

Lopa Banerjee: The UNSC 1325 and the Beijing Platform for Action are path breaking normative frameworks that set an agenda for action. However, in spite of commitments made by governments and stakeholders to the achievement of these standards, implementation of these normative frameworks of action have been sluggish. There’s insufficient political will and inadequate investment in gender equality.

Abramian: How did you come to focus on and become a gender and human rights thematic expert?

Banerjee: I came to it through my lived experience, my academic studies and professional interests, all of which shaped my value system–what I experienced and what I’ve seen around me. Not a single woman in the world–whatever their position of power–has escaped sexism, misogyny in some shape and form. This has shaped my politics, and my personal and professional life.

Abramian: What was the impetus for the Generation Equality’s (GE) groundbreaking, multigenerational campaign that you are leading?

Banerjee: Twenty-five years after the momentous UN Fourth World Conference on Women and the adoption of the Beijing Platform for Action in 1995, progress for gender equality has been sluggish. Ambitious visioning, urgent action and collective commitment to that action is imperative if we are to see significant and sustainable progress towards gender equality in our lifetime.

Abramian: Not a single country today can claim they have achieved gender equality. How urgent is the next generation of women’s rights?

Banerjee: Urgent, collective, ambitious action on a path charted by the women and girls of the world lies at the heart of Generation Equality and its focus on intergenerational and next generation activism and leadership. It is through impatient acceleration of implementation of agreed commitments we hope to achieve gender equality in the foreseeable future.

Abramian: How will you accelerate gender equality globally?

Banerjee: Through investment, collective action, and political will. TheAction Coalitions bring together the leadership and participation of various public and private sector stakeholders together with civil society, youth groups, the UN System and others–and forge new partnerships, change trends, redesign our societies and chart an agenda of concrete actions to realize gender equality before 2030.

UN Women is the youngest of UN agencies, born in 2010 of civil society activism and out of the promise and aspiration of the Beijing Conference, which set forth a blueprint for gender equality. Following the 1995 Fourth World Conference in Beijing and in the last 25 years, there has been progress no doubt, in laws and policies, in lifting women and girls out of poverty, in girls’ education, in women’s representation and leadership but not deep enough and not sustainable.

Simultaneously, there has been enormous, intersectional and intergenerational mobilization among women and young people on issues of democracy, racial and economic justice, ending violence, sexual harassment, abuse, climate justice, and much more. Movements like #MeToo, #NiUnaMenos (not one woman less), Black Lives Matter, the Women’s March, student and citizen movements across the world have galvanized the public to demand equity and social justice in their countries and communities.

With a clear vision driven by the women and girls of the world but in a multi-stakeholder common agenda, the Generation Equality Forum would support and stand alongside the UN intergovernmental processes such as CSW that set standards for the achievement of gender equality. We hope to see, in our lifetime, the impact of urgent action–significant and irreversible progress.

Abramian: Why are the Action Coalitions focusing on six themes?

Banerjee: The themes are critical for achieving gender equality. They are gender-based violence, economic justice and rights, bodily autonomy, sexual and reproductive health and rights, feminist action for climate justice, technology and innovation for gender equality, and feminist movements and leadership. The Action Coalition Blueprints will be defined at the GEF kick off March 29-31 in Mexico City and then culminate in ambitious actions in Paris this June. The gathering in Mexico will be a call to action for the commitments–we will announce a 5-year plan for Generation Equality in Paris on how we will effect change.

Abramian: How will the Action Coalitions deliver results?

Abramian: How has Covid exacerbated this urgency–beyond the increased Gender Based Violence (GBV)?

GBV has always been prevalent–but the pandemic proved how inadequate the systems are in protecting women and girls from violence and exposed the inadequate, fragile health and social services. The impact has been devastating. It’s crucial that the world pivots forward, transformed. When the financial crisis hit, we went into austerity. When Covid hit, we went into relief and stimulus mode–that is an opportunity to now build back equal and transformed.

With some 70% of healthcare workers being women, building back better shouldn’t be a band-aid solution of just rebuilding existing social systems–if that happens then next time around will be an even deeper wound. This is an opportunity to build in resilience in social systems and services and develop the economic policies that address these inadequacies.

Abramian: You have worked across South Africa, India, Iran and Bangladesh–are the women’s role and women’s rights the same, or different across these countries? How?

Banerjee: Critical gender equality issues remain the same. Violence against women and girls, absence of women in leadership positions in public life, the care economy, unequal pay, women’s safety and security, voice and decision making in conflict resolution and building back from conflict and humanitarian crises and so on. The context may vary, but insufficient progress and lack of systemic transformation are a constant across most parts of the world.

Abramian: What will jumpstart the full adoption of UNSC1325–even though 189 countries endorsed it, there hasn’t been full ratification, and adoption? Why?

Banerjee: Political will and sufficient investment are the key drivers that need to be galvanized for lasting change.

Abramian: Does this mean working with world leaders to request investments on women’s issues?

Banerjee: Overall investment in gender issues is very low. Gender ministries are among the least funded across the world. No matter how much governments talk about prioritizing gender, the only way to prioritize gender is by investing in gender policies, implementation, civil society, women’s rights groups and grassroots organizations. Unless that’s stepped up, there won’t be any sustainable change.

Political will requires governments to dedicate resources! It’s a question of how to prioritize gender. Resource allocation to stop violence against women and girls necessitates investment in access to justice services, training for judiciary and law enforcement, investment in gender responsive education, culture change in the police, government officials, teachers, security forces, media and influencers, and religious leaders. It also requires legislative policy changes and collaborations between public and the private sector. Companies need to adopt policies to end violence against women and sexual harassment and abuse in the workplace and create safe and empowering work cultures for their workers.

Abramian: What’s your message to world leaders and governments in urging them to adopt the Generation Equality campaign?

Banerjee: The world has just gone through a universal catastrophe and COVID has destroyed economies, communities, and shone a light on systemic inequalities and inadequate healthcare systems. As the world emerges anew–with stronger economies and overall resilience, addressing gender inequality must be at the core for a transformed world to be sustainable, equitable, prosperous, and offer a future for all those who live in it.

This is the Generation Equality moment–to act decisively, urgently, collectively and for equality for all. 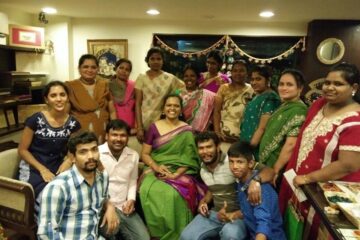 How do you empower women, up-cycle waste into functional gifts, and weave social impact across continents? You create an ecosystem of women entrepreneurs, sustainable farming to uplift the lives of marginalized women, and complete the cycle Read more…